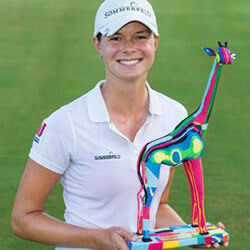 German Esther Henseleit has won her first Ladies European Tour Order of Merit title after hitting a new course record and subsequently winning the Magical Kenya Ladies Open. The 20 year old had started the final round a total of seven shots behind overnight leader Swedish Julia Engstrom. But an eight under par 64 saw Henseleit finish her day on 14 under while playing at Vipingo Ridge, pushing her to one shot ahead of Indian Aditi Ashok as Engstrom carded a 74 and ultimately finishing in third place.

Her win at the inaugural event that took place in Kenya saw her overtake Norwegian Marianne Skarpnord to finish the year as the current European number one, while Austrian Christine Wolf completed the event in third place. Henseleit is the first German to claim both the Order of Merit and rookie of the year award, and only the third golfer of all time to win both during the same season after Laura Davies in 1985 and Carlota Ciganda in 2012.

Henseleit had begun with five birdies for the first nine holes, quickly catching up to 2018 rookie of the year Engstrom, by two shots at the turn. Another three birdies and a run of three pars saw the player manage to hold off Ashok as Engstrom ended with two birdies and four bogeys, closing on 11 under, three shots behind Henseleit. The Ladies European Tour Order of Merit is set to be renamed the Race to Costa del Sol next year.