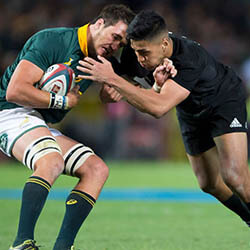 Herschel Jantjies managed to claim a late try for South Africa as the team fought hard to end the game with a 16-16 draw against New Zealand, and continue their lead in the Rugby Championship. The other two games saw Australia win against Argentina 16-10 wile playing in Brisbane.

The All Blacks had lead 16-9 as replacement Jantjies who has had two tries on his debut in their latest win against Australia. Handre Pollard added the conversion to push the game to a tie and keep the Springboks at the top of the roster with one more game to go for the tournament.

Lock for the All Blacks Brodie Retallick had suffered a dislocated shoulder while playing in Wellington, but is expected to have fully recovered in time to make the World Cup, which is set to start at the end of September in Japan. With the year’s competition now shortened to three rounds due to the World Cup, South Africa stand the chance of winning the Rugby Championship for the first time if they are able to best Argentina in Salta.

Pollard had kicked two early penalties in the Westpac Stadium before Jack Goodhue had converted a try to give the three tie defending champions a lead by half time. Their lead was stretched by Beauden Barrett, but by the time the 79th minute had past,, Cheslin Kolbe chipped over for Jantjies to touch down, and the match was given to South Africa.