Extreme Choice a Horse to Watch 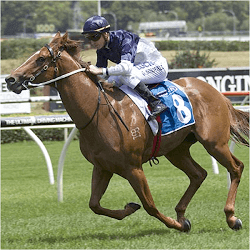 There are some horses that burst onto the racing scene and simply demand to be noticed. Extreme Choice is one such youngster. His career so far has been nothing short of stellar, with seven starts and five firsts. He won the Moir Stakes (1000m) at Moonee Valley late in 2016, and does not seem set to slow down any time soon.

As we gear up for 2017 Extreme Choice is a name that’s on everyone’s lips and it could well be that next year will be his time to shine.

Winner of the Moir Stakes

The Moir Stakes at Moone Valley is a grade one race, with the likes of the legendary Buffering and arguably Australia’s best sprinter Chautauqua taking part. Extreme Choice was much younger than both of these super stars and looked like a precocious upstart giving the old guard a middle finger. His trainer, Mick Price decided to take a shot at the coveted Moir Stakes after Extreme Choice won the Group One Blue Diamond Stakes at Caulfield against the likes of Flying Artie and Zamzam. He was rested for 197 days, which clearly did the colt a world of good as he returned on blistering form to leave his competition standing.

“Not even Lankan Rupee has gone that fast. He went like a rocket. I’ve never been on one which went that quickly,”

The favourite, Chautauqua, looked set to take the race when Extreme Choice settled into his usual position of third behind the leaders. Rounding the turn however, Chautauqua failed to turn on his trademark afterburners, leaving an opening for Extreme Choice who had been hanging back for the first time in his career as a new tactic. It world like a bomb and he rocketed past the leaders to win by a number of lengths.

Extreme Choice’s next outing was a month later at Flemington at the Coolmore Group One race. He ran against Flying Artie again, and Astern, and came in fifth. His trainers decided to freshen him for a few days after that and as yet he is still on sabbatical.

That being said, there are huge things in the colt’s future. He has been nominated as one of the champion two year olds for 2016 due to his almost impeccable race record.

From here the sky is the limit. So far the colt has not been nominated for anything in 2017, but a close eye on this space may just reward you with a glimpse at a very promising future for the young chestnut colt. He will of course always be a contender as a champion stallion, so even if he is done with proving himself on the race track, his stud life may have just begun.