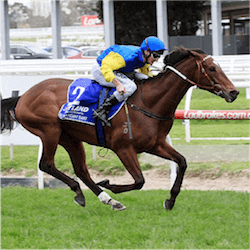 Weir Ready To Defend At The Goodwood

The Morphettville Racecourse is gearing up for another exciting Group 1 race this year as the Goodwood kicks off Saturday the 20th of May. The title defence this year is the task of Darren Weir’s Black Heart Bart.

The star of Weir’s stable, Black Heart Bart comes off of impressive wins at the start of this year.

Notably he took the first place position at the Futurity Stakes in February. This will be Black Heart Bart’s first run since that win and his trainer believes he will be ready for another victory.

Jarrod McLean who is running Weir’s stable stated that Black Heart Bart is in fantastic shape and he believes it is set for another storing performance after recovering from the last race.

Currently Black Heart Bart is sitting on 5 group 1 victories that were attained in the last 12 months. McLean went as far as to say that it is the best horse he has ever worked with.

Darren Weir’s stable is riding high at the moment thanks to 14 wins in three days at the Warrnambool Cup at the start of May.

A Fan favourite who may be up to the task of taking out Black Heart Bart is Tony McEvoy’s Hey Doc. He has had a 5 week rest since his last race and he is listed 4th in line at most bookmakers to take the race.

Hey Doc’s unplaced effort this year at the Doncaster Mile has not put a damper on McEvoy’s spirits. He stated that Hey Doc has shown such good performance at Angaston that he is taking a chance and pushing forward with Hey Doc to show at the Goodwood.

McEvoy is hoping to push Doc through the Spring Carnival and depending on how he performs at The Goodwood, he may even run at The Everest.

Having started in 1881, The Goodwood is one of the longest running races in Australia. Last year’s purse was a massive A$500 000. This year is set to be just as exciting as previous years with fantastic competitors lined up for the race.

Other horses to keep an eye out for include the indomitable Vegas Magic, Malaguerra, Secret Agenda and the always reliable Illustrious Lad.