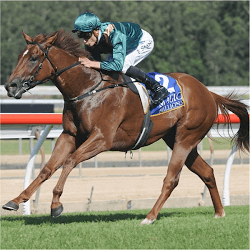 Capitalist a Horse to Watch

Capitalist made huge waves as a two year old when he stormed onto the scene winning his first ever race under Peter and Paul Snowden. From there, there was no stopping the chestnut colt who gambled happily past every other horse he looked at, including winning the 2016 Sydney Autumn Carnival with a commanding win in the Gr1 3.5 million dollar Longines Golden Slipper over 1200m at Rosehill. Trainer Peter Snowden said, that he was traveling like a winner a long way out, and put paid to the rest of the field in a few strides without being put under any real pressure.

After the group one win at Rosehill, the colt was spelled for 75 days where he spent his time kicking up his heels in a green paddock and wolf whistling at mares. He came to work in fighting form, however, with three more wins at the end of 2015. Another freshener of 56 days did him good and resulted in another three placings.

His three year old season started with a bang, with the colt running two firsts in soft going at Randwick. From here he looked to have all the making of an elite racehorse, set to take on the likes of Winx and Takedown. A fourth in Aug was because he was carrying a large amount of weight, which caused the colt to struggle a bit and be slightly off form. He spelled again for 49 days, coming back gamely with a win and a third at Randwick

Injury Puts Capitalist in Time Out

The big chestnut was then spelled by his trainers yet again, as they sensed something was not quite right with their star. He was aiming at the Darley Classic at the end of November, where he was set to take on the older horses and really make a name for himself. Sadly he pulled up lame after a training session, proving their suspicions correct.

Capitalist had a bone chip in his near fore fetlock, a diagnosis that could spell doom for many a thoroughbred. The condition is operable, but there is a fifty-fifty chance as to whether the horse will ever run again. And with a champion such as Capitalist is would be unlikely that he would ever reach his top form again. Luckily for the colt, he is a colt, and so can go on to stud duties at Newgate Farm. We look forward to a crop of very promising horses from him.

Capitalist looks to make a superb stallion prospect, most likely throwing his chestnut colour and deep girth to his foals. His sire, Written Tycoon, is by Try My Best via Ingleisa and Last Tyccon. Try My Best is by the most famous sire of all times, Northern Dancer. His dam has just as good a bloodline with her sire being a Mr Prospector baby via Fusiachi Pegasus. Other well-known sires in her line include the coveted Danehill Danzig line. Capitalist’s dam, Kitalpha, ran for three seasons herself. She had a mediocre racing career; with only one win very early, but consistently being in the top placings most of the rest of the time.

A relative newcomer to the racing circuit but one that’s set to continue making waves, Capitalist is a horse to keep an eye on in 2017.