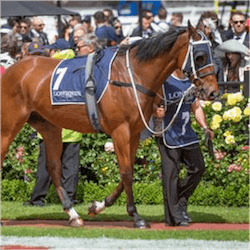 The racing team, Gelagotis, have made it public that their veteran racer Mourinho will use the Group 2 William Reed Stakes as the first event of the season for their horse.

He had completed a very promising strong barrier trial at the start of the year and his owner believes he is ready for a great performance in his 2017 season.

The future of Mourinho was very much in doubt at the start of 2016. The group 1 winning racehorse was out of the field since February 2016. This was after a third place performance in the 2nd group Peter Young Stakes.

He had before that suffered a string of problems and ailments that eventually led to his trainers pulling him for the rest of the year to make a full recovery.

After he completed his 800m-barrier trial, his stable manager was outspoken on his great recovery since his February run. She stated that Mourinho is just about ready to be back to professional racing form. They take the horse for half-mile trials in the mornings and his rider has confirmed that he seems himself once again.

Despite being ten years old already, Mourinho seems to be getting better and better each year. He made his racing debut in 2010 with a big win at the Tasmanian Derby over 2200m.  Mourinho quickly established a name as a solid performer, consistently ranking in the top 5 finishes of his races.

His maiden black type win was achieved in 2013 at the Group 3 JRA Cup in the respected Moonee Valley.

He further cemented his reputation at the 2015 William Reid Stakes when he outperformed many great horses including the famed Dissident.

He went on from this strong showing to deliver the best performance of his career so far with massive wins at the Underwood stakes, the Peter Young Stakes, the PB Lawrence Stakes and a third place finish at the CF Orr Stakes.

Last year’s William Reid champ was Flamberge with his trainer Peter Moody. Moody had previously had immense success with his horse Black Caviar.

Moody retired from professional racing after the win, this follows a 6 month ban from the sport. He was accused of leaking information regarding cobalt charges aimed at trainers Danny O’Brien and Mark Kavanagh.

This year however, many eyes will be on Mourinho, as all indications are that this may just be his year.