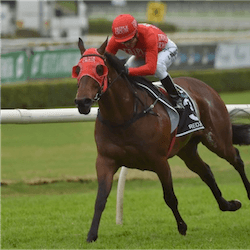 The inaugural TAB Everest 1200m race created a media hype weeks before the event even took place. For the 33500 odd spectators at Randwick, the great Australasian dash lived up to its hype, even surpassing the expectations of all the event organisers. From the moment the gates flow open, the crowds were on their feet, cheering as some of the best horses in Australian racing created history.

It was no surprise that the $10 million race was won by Redzel. Trained by the dynamic father and son team of Peter and Paul Snowden, Redzel cruised home to give the pair one of their biggest wins to date. The Snowden’s have picked up a great many wins, includes two Golden Slippers, but claiming the Everest has taken them into a whole new league. Here is how the race played out:

As the gates opened, Chautauqua and She Will Reign were slow to get out. Houtzen immediately jumped into the lead with Redzel sitting just behind her on the outside. Craig Williams switched things up on Vega Magic, finding cover in Midfield instead of pushing forward. By the 800-meter mark, all the horses had settled into their respective positions with Houtzen leading the charge out front. Fell Swoop got trapped three wide without cover. She will Rain managed to gain a bit of ground on the leaders and ran up the fence into fourth.

Brave Smash started tracking well up the midfield while Chautauqua was trailing 12 lengths off the leaders. On the turn, things started to change. Redzel looked to be traveling well and closed the gap on Houtzen. Vega Magic got of bit of free space and started his run to the finish. Brave Smash was held up in Midfield but still had a bit of gas left in the tank. She will Reign also went for her run while Chautauqua was still 10 lengths off the pace at this point.

At the 200m mark, Redzel had pulled into the lead and looked strong into the home stretch. Brave Smash and Vega Magic looked to be warming up, but She Will Reign hit a wall. Chautauqua started gaining ground but was still 6 lengths off Redzel. Coming across the finish line, Redzel was able to hold off all the challengers and claim the win by three-quarters of a length. Vega Magic and Brave Smash finished well to take second and third respectively. Chautauqua charged home to claim fourth while she will Rein finished a disappointing 11th. Fell Swoop came in last after a tough run.