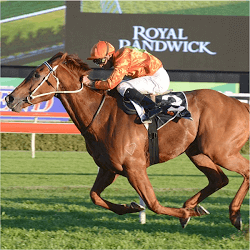 Terravista is a chestnut gelding trained by Joseph Pride. He has so far, in his racing career, won over two million Australian dollars, putting him in the elite class of thoroughbreds. Terravista last ran the 2016 Winterbottom Stakes in Perth, coming in 10th after being the favourite. For punters this was bad news, as many had backed him to be a winner and were left sorely out of pocket.

Terravista is one of the old guard, being six years old at the end of 2016. He has no nominated races coming up and may be spelled or retired by his trainer Joseph Pride. After his dismal performance in the Winterbottom Stakes race, retirement looks like an option.

Terravista started his career as a three year old under Joseph Pride’s tutelage. He proved a great horse from the beginning, giving his trainer a first place in his very first race. He was very lightly raced in his first season, racing only twice as a three year old. The next year he ran seven times in his four year old season. The latter concluded with five firsts out of seven starts, one second and an eleventh for the very last race. He was then spelled for about five months before storming back with a first at Randwick over 1200 meters. He ran another seven races before finishing 12th in the Schweppes All Aged Stakes at Randwick.

Just under a year later Terravista was ready to take on the world again, opening with a first back at Randwick.  His fourth season saw him trailing off a bit, with only three places, only one of which was a first. After a spell of six months in April he tried again in November 2016, coming in 10th at the Winterbottom Stakes.

Some spectators say that he pulled up a bit on his run down to the gates which may account for his disappointing place. It is also possible that he, as a six year old, is simply done with his racing career. Either way, Terravista was a legend in his racing lifetime and deserves a long retirement in a green paddock somewhere.

Terravista is by the stallion Captain Rio who is an Irish horse currently standing at stud in Australia. Captain Rio has the famous Nureyev in his sire’s line, along with a bit of Mr Prospector and Nijinsky thrown in for good measure. He was a super racehorse in his own right, with Terravista being his top earning progeny. Captain Rio is known for throwing not only his talent but also his colour and temperament to his foals. To date, his has a large number of progeny, many of whom are proving themselves over both long and short distances.

Terravista’s dam, Parfore was a 1997 mare who didn’t run exceedingly well herself in her own carreer but is now known as a grade one producer broodmare. She was by Gold Brose out of a Twig Moss mare.  Awarded the 2015 New Zealand Broodmare of the Year, Parfore died at the age of 18 leaving behind a foal and a yearling.