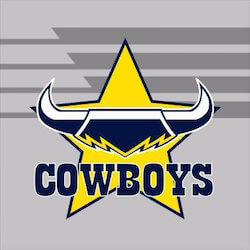 North Queensland Cowboys’ fans must be thanking their lucky stars and polishing their horseshoes. After starting the 2017 NRL season strong, a series of crucial losses in the middle rounds left the Cowboys in danger of missing the knockout rounds altogether. They only just managed to stay in the Top 8 in Round 26, but they nevertheless made it into the finals for the eleventh time, and the seventh year in a row.

Then came the big upset: a narrow 15-14 victory over defending 2016 champions the Cronulla-Sutherland Sharks in their Elimination Final on 10 September, keeping the Cowboys on track to repeat their only Premiership win, achieved in 2015. The following week, they played a Semi-Final against the fourth-placed Parramatta Eels, after the Eels had lost their Qualifying Final closely to the Melbourne Storm.

The Cowboys finished the SF 24-16 ahead, progressing to last Friday’s Preliminary Final against second-placed Sydney Swans. The Queenslanders, playing away, inflicted a 29-16 defeat in the Allianz Stadium, to win themselves a shot at a second Premiership in this Sunday’s Grand Final at the ANZ Stadium.

Hosting the Cowboys on Sunday is the team that took the tournament lead in Round 1: the Melbourne Storm. Although they last won the NRL Premiership in 2012, the Storm have been finalists just as often as the Cowboys recently, making the knockout stages for seven years running. They were also last year’s GF runners-up to the Sharks, and their form throughout the tournament has left them favourites to win again on Sunday.

Betting sites online are offering the Storm at $1.30 or less to win, while the Cowboys are considered outsiders at $4.00 and up. But bear in mind that the Cowboys have a not-so-secret weapon: towering prop Jason Taumololo. Given his sterling performances in recent weeks, it’s unlikely that the Storm can stop him; all they can hope for is to slow him down.

If they can pin the Cowboys down in their own half and shut Taumololo down as soon as he gets the ball, the Storm have every chance of breaking through the Cowboys’ defence and securing a victory. But whichever side proves the stronger, Sunday’s Grand Final promises some outstanding rugby league action.