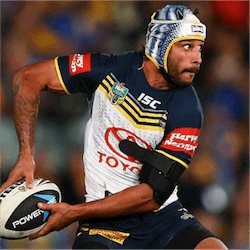 Johnathan Thurston will make his Auckland Nines debut playing for the North Queensland Cowboys this weekend. After missing out on the first three Auckland campaigns, Thurston will finally get his chance to show off his talent at Eden Park. He will share the captaincy with Gavin Cooper, the imposing Queensland backrower and spearhead a strong squad including some familiar names.

Joining the Cowboys for the Auckland Nines is Jason Taumalolo, the talented Dally M Medallist along with Kangaroos Michael Morgan, Kyle Feldt, Justin O’Neill and rising NRL star Kalyn Ponga. The new recruits including former Melbourne playmaker Ben Hampton along with ex-Titan’s backrower Shane Wright. Ethan Low will also be joining the squad in the back row after a successful recovery from a spinal injury in 2016.

The Cowboys are scheduled to fly to Auckland on Wednesday. They start off their campaign with pool games against Canberra, the Sydney Roosters and South Sydney. Meanwhile former Kiwi skipper Benji Marshall will make his debut playing for the Brisbane Broncos.

Marshall will be joined by controversial flyer James Roberts who made headlines recently facing allegations of assaulting a Gold Coast nightclub patron.  Roberts was picked up shortly after the NRL integrity unit was unable to obtain video footage of the alleged incident. While the matter is still open, the integrity unity said that they would take no action against the athlete at this point in time.