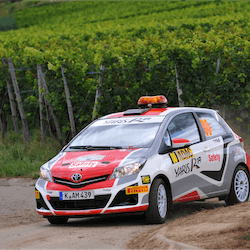 Thanks to great performances as well as positive test results, Toyota will be entering three Yaris vehicles into the upcoming Polish leg of the World Rally Championships.

In the previous round of the championship, all three of Toyota’s cars finished in the top six. The track conditions in Poland are very similar to the tracks in Estonia where the Gazoo racing division of Toyota have also tested successfully.

The 74th Rally Poland event is a 326Km course with lots of sharp twists and turns as well as high grass areas that obscure track visibility. The team lead, Tommi Makinen has said that drivers should be aware of the fast gravel events on the course.

Toyota has entered three drivers from Finland for Rally Poland, Jari-Matti Latvala, Juho Hanninen and Esapekka Lappi. This team had a great performance in Sardinia, with Latvala finishing second and Lappi winning multiple race stages and bonus points for the team who now sit in the third position.

They will most likely not be facing much challenge from team DMACK who pretty much dominated the Poland rally last year. The previous driver for the team, Ott Tanak drove a Ford Fiesta that failed to finish in pole position after damaging his tyre. This year driver Elfyn Evans believes they won’t be having as powerful a showing as the team has changed the car’s tyres to a more all-round model. Last year their tyres were tailor made for the conditions in Poland.

They have tested their new tyre set out in Sardinia in the last race as well as Mexico and Portugal but they do not expect the same performance as last year in Rally Poland.

All the team dos the World Rally Championship will be preparing themselves for the fast course awaiting them. Toyota has already shown how much they favour the faster course so they could be gaining some much needed leverage at this week’s race.