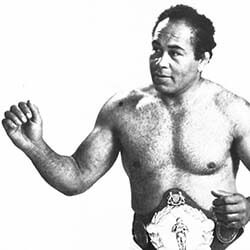 Wrestling legend John da Silva has died. The New Zealand sporting great was 86 and according to a statement released by his family, died at his home on Great Barrier Island on April 8.

His family also confirmed that the boxing great’s health had rapidly deteriorated over the course of recent months and that he had passed away of complications created by pneumonia.

Da Silva enjoyed a phenomenal career boxing for New Zealand. He was a heavyweight fighter and represented the country at the 1956 Olympic Games in Melbourne.

After turning pro in 1958, he began appearing on the international sporting scene across a host of countries – including Scotland, Ireland, Canada, the US, Hawaii, Singapore, India, France, Germany, and Singapore. He eventually retired from the professional ring in 1977.

The star Kiwi in 1963 received a personal invitation from the recently passed Prince Phillip to appear at the Royal Albert Hall in London that year. Da Silva was considered a cult personality in the Pacific and classed in the same class as Robert Bruce and Steve Rickard.

Following his retirement, the New Zealander dedicated his life to helping at-risk youth find their own way. He focused on rehabilitation of the youth, and helping young people steer clear from a life of crime. For his incredible work in this area, Da Silva was in 1994 awarded the Queen’s Service Medal.

Da Silva also played a huge role in the sporting career of his son, Garth da Silva, who also went on to become one of the country’s top heavyweight champion boxers.