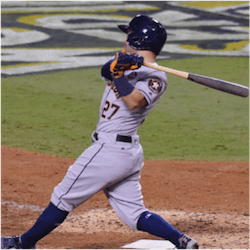 Any hopes the Los Angeles Dodgers may have had of sweeping Major League Baseball’s 2017 World Series after their Game 1 victory against the Houston Astros at Dodgers Stadium on Tuesday were dashed in Game 2. Back at Dodgers Stadium on Wednesday, the Astros pulled off a 7-6 reversal to tie up the Series, with a possible five games left to play.

It was an encounter that saw records tumble. A combined eight home runs between the two teams, including two from the Astros’ George Springer, was the highest total of homers hit in a World Series game. Along with Springer’s two long balls, solo shots from his teammates Marwin Gonzales, Jose Altuve and Carlos Correa meant that Houston becomes the only team in MLB history to score home runs in a post-season game’s ninth, 10th and 11th innings.

The Dodgers weren’t backwards in coming forward, either; Yasiel Puig put a homer away in the 10th, and Charlie Culberson added another at the bottom of the 11th. Between the two sides, there were five extra-inning solo shots, breaking another NBA post-season record. The previous highest total of three was set in Game 1 of the 1995 AL Division Series between the Boston Red Sox and the Cleveland Indians.

The win has resulted in lower odds at online betting sites on a Houston 2017 World Series victory, but the Los Angeles side are still the odds-on favourite, at $0.80 and below. The Astros aren’t too far off, though: generally on offer at even money or slightly better.

But Houston now has three home games scheduled in a row, so the equalising win couldn’t have come at a better time. If they can beat the Dodgers at Minute Maid Park on 27, 28 and 29 October, they won’t need to play the final two games of the World Series scheduled back at Dodgers Stadium on 31 October and 1 November.

Of course, if the Dodgers can snatch three consecutive wins playing away, the same applies. Whether the championship finishes in Houston or Los Angeles, however, there is going to be plenty of world-class baseball on offer to entertain Kiwi online sports betting fans.

Detroit Tigers Hall of Famer and now MLB analyst and commentator, Jack Morris, has been suspended after using a mock-accent often used to tease and degrade Asian people. Morris used ….

Just one year after joining the cream of the crop in the American League Cy Young Award race, Luis Severino has been selected to start the season opener for the ….