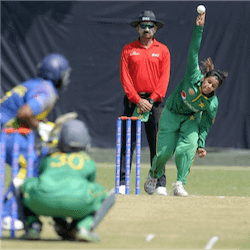 New Zealand’s White Ferns have been contesting the ICC Women’s World Cup, which is a quadrennial international ODI tournament like its Men’s counterpart, since it was first played in 1973. The Ferns have already booked their place in the 2017 ICC Women’s World Cup in England over June and July, by virtue of their finish in the Top 4 of the 2014-16 ICC Women’s Championship. The other three teams thus qualified are the West Indies, Australia and hosts England.

Despite the Ferns’ assured place in the tournament, however, the New Zealand sports betting community will still have a keen interest in the ICC Women’s World Cup Qualifier, running from February 07-21 in Colombo, Sri Lanka. There are a few sides among the 10 nations competing that were in the running for qualification last year, so the qualifier will be a good opportunity to assess which of them will pose threats in the lower half of the World Cup Table.

The four nations that finished in the bottom four of the 2014-16 ICC Women’s Championship, Pakistan, India, Sri Lanka and South Africa, have automatic entry to the qualifier, along with the remaining two teams with international ODI Status, Bangladesh and Ireland. The final four teams are winners of their regional qualifiers: Zimbabwe from Africa, Scotland from Europe, Thailand from Asia and Papua New Guinea from East Asia-Pacific.

The ICC Women’s World Cup Qualifier in 2017 is divided into two groups, with India, Sri Lanka, Ireland, Zimbabwe and Thailand in Group A. The Indian team will most likely be the strongest, although their Sri Lankan hosts could challenge India’s dominance.

Group B Has Pakistan and South Africa

In Group B, South Africa has spent the past few weeks adjusting to the sub-continent’s conditions with an ODI series, crushing Bangladesh 4-1. After the team missed World Cup qualification in the 2014-16 ICC Women’s Championship by a hair’s breadth last year, they are doubly motivated to make it through to London in June.

But the Pakistan side have been taking their practice camp in Karachi just as seriously, and South Africa is one of their great cricketing rivals, so Group B could be where the epic clashes of the qualifier take place. Bangladesh, Scotland and Papua New Guinea complete the group.