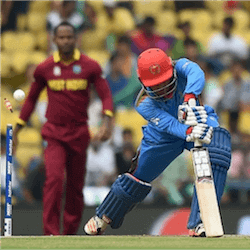 The 14th of June, West India and Afghanistan will be taking part in their 3rd and final ODI meeting at Derren Sammy Cricket Stadium. So far the two teams have each won 1 game so this next meeting will be the decider.

The last match was a very close win for the West Indies who lost the first ODI by 63 runs. Fans will have a nail biting weekend ahead of them as West Indies will need to put up a more commanding performance if they are to claim victory against Afghanistan.

Rashid Khan from Afghanistan recorded the 4th best ODI bowling figures ever and won the Player of the Match award for his efforts.

During the second encounter, Afghanistan again won the coin toss and again chose to bat first. They could only chalk up 135 this time which gave the West Indies a easy target to chase after they failed to catch up to Afghanistan’s 216 in the first match.

The West Indies made 138 runs in 39.2 overs, just making the total. Shai Hope made 48 off 77 balls and won the Player of the Match accolade. That said, the assault of Rashid Khan kept up the pressure as his leg breaks and googlies kept the Indies batsmen under his thumb.

Unfortunately Khan was only brought on after the 7th over, perhaps in order to recuperate for the third match scheduled for the 14th of this month.

By that time the team of Kieran Powell and Evin Lewis had already taken the Indies a third of the way to the required total, which was not much to begin with in the first place.

This momentary lapse by the Captain may have eased the pressure on the Indies enough to ensure them the game.

This ODI series saw the debut of West Indian newcomer Roston Chase. He is an all-rounder batsman from Barbados who made a name for himself playing for his home island. He first played in a test series against India in 2016, with this match marking his One Day International debut for the West Indies.