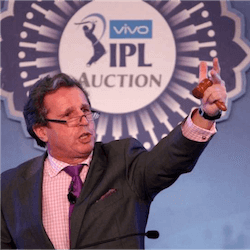 30 NZ Cricketers Put their Names In for the IPL Auction

The Indian Premier League, more commonly known as the IPL is the largest and most prolific Twenty20 franchise cricket tournament in the world. It is also one of the most lucrative for both the players and the teams. Unlike Australia’s Big Bash League or New Zealand’s Super Smash, the IPL attracts players from all over the world, hoping to get in on the action as well as the very lucrative contracts.

Kicking off on the 4th of April, the IPL runs until the 31st of May in which time the cricketing world stops what they are doing and glues themselves to their respective screens. Within the IPL, each team is allowed a certain percentage of non-Indian players, which usually consists of the best batsman and bowlers from the top cricketing nations. Unless under contract, players are bought at the IPL auction at the end of January.

Anderson and McCullum Set their Reserve at Maximum

This year, 30 New Zealand players have registers for the IPL auction with both Corey Anderson and Brendon McCullum pricing themselves among the world’s best. According to the tournament organisers, Australia has the highest number of non-domestic players interested with 58. South Africa is also planning on entering 57 players in the Auction while the West Indies and Sri Lanka have 39 players hoping to be snapped up.

Including domestic players, there are a total of 1122 players who have put their names down for the 11th edition of the upcoming tournament. Most of the names have not been made public, giving the eight franchises time to assess their potential team lists beforehand.

Kane Williamson and Trent Boult Hoping to be Snapped Up

In 2017, eleven New Zealanders played in the IPL, however, none of them were retained buy their franchise and must go back on auction. New Zealand seamer, Trent Boult has set his reserve price just below the maximum at $325,500; so too did Black Caps captain Kane Williamson. Meanwhile Mitchell McClenaghan and Tim Southee are hoping to catch the eye of the teams with a reserve at $217,000.