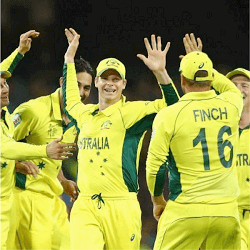 Not only have Australia thrashed the New Zealand cricket team, they’ve done so in style, as their Captain Steve Smith has hit the highest one day international score whilst in to bat.

Beating New Zealand by a blistering 68 runs, the Aussies ran roughshod over the Kiwi team and sent them packing with their tail between their legs. Smith was of course instrumental to their win and hit a whopping 14 fours and 4 sixes in 164 runs from 157 balls. Australia used their home ground advantage to the full, and amassed a winning total of 324 for 8, proving just too good for the Kiwis to beat.

New Zealand tried hard, but just couldn’t compete. Opener Martin Guptrill smashed a total of 10 fours and 6 sixes in 114 off 102 balls, and this seemed like an impressive start, but in the end New Zealand were all out for 256 runs in the 45th over.

Smith was clearly the star of the match, and in addition to his team winning the toss and hitting the SGC top score, he also displayed some impressive fielding skills. He managed to take a one handed catch in spectacular style, diving high into the air to grab the ball and managing to hang on to it as he fell to the ground. Its clear he was in fine form, and more than ready for his team to win the ODI.

The Aussie skipper reached his first One Day International Century against the Kiwi team in the 37th over and then went on to record his highest score yet in the remainder of the 50 over game. He departed just 17 balls before the end of the innings, satisfied with his batting and the fact he had another record tucked under his belt.

For New Zealand there was just no escape from the Aussies prowess and this time around they were simply outclassed. Tom Latham went out in the second over but Guptill managed to hang in there and become the fastest Kiwi player to score 5,000 One Day International runs, reaching his 11th Century in the game off 93 balls in the 31st over. Unfortunately he was caught at his second attempt and by Aussie substitute Glen Maxwell at the end of the 33rd over, still needed 140 runs to win, and Australia managed once again to emerge victorious.

This game marked the 5th of Australia’s successive ODI wins, and all eyes will be on them to see if they can continue their winning streak when they take to the field in Canberra to play the second match of the three match series.