Australia Cruise Through To Tri-Series Final 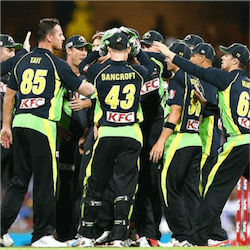 Australia Bat Their Way into the T20 Tri-Series Final

After a convincing win Against the Black Caps, Australia has cruised past England to secure their spot in the T20 tri-series final. Decent knocks from D’Arcy, Glen Maxwell and Chris Lynn took Australia comfortably past the 137 runs needed for victory with 33 balls to spare. With 3 consecutive wins in the bag, Australia now head to Auckland to await their challengers on the 21st of Feb.

As for England, they now face back-to-back matches against New Zealand, starting in Wellington on the 13th of Feb and then moving to Hamilton on the 18th. With Eoin Morgan out of the match, it fell to Jos Buttler to captain the English side.

Coming out to a sluggish MCG pitch, the top order never really got going and Australia’s disciplined bowling put the visitors on the back foot as 34 for 3. With Morgan absent, James Vince had a chance to impress at number 4. His wild and brilliant knock was short lived though as a change of pace from Andrew Tye saw him walking back for 21 off 21 balls.

England’s fearless batting from the previous match was nowhere to be seen as many of the top order fell for single figures including Jason Roy for 8, Alex Hales for 3 and Dwid Malan for 10. It fell to Sam Billings and Buttler to stabilise the innings, a job they took on reasonably well considering the circumstances. Buttler was the top scorer on 46 from 49 while Billings only contributed a single boundary in his innings to take England’s total to 137 for 7 at the end of their 20 overs.

While England failed to find any headway with the bat, Australia seemed to relish the sticky pitch. The top order made easy work of the English attack with Chris Lynn setting the tone with 31 runs of just 19 balls. The spinners put the brakes on the scoring with Adil Rashid and Liam Dawson calming things down. However, once Short and Maxwell got their eye in, they were both dispatching the ball past the boundary rope with regular frequency.

Maxwell hammered 2 sixes and 3 fours in his 26 runs before mistiming a pull shot from Chris Jordan. By then the damage had already been done. Australia had the opportunity to coast over the line, but Finch and Short were fired up and ready to finish the job. In the end England had no answer for the big hitting Australians who cruised over the line in another emphatic win.