Australia Have Taken Back The Ashes 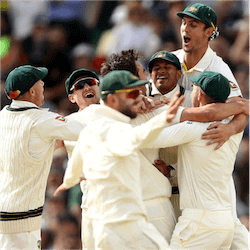 Australia has done what they set out to do and more. Crushing England by a full innings and 41 runs in the third Test, the Aussies have reclaimed the Ashes with two matches to spare. Captain Steve Smith and his men needed just a single session on Monday to despatch England for 218 runs who resumed play on 132 for 4 on day five.

With rain pelting the pitch overnight, England clung to the hope that the rain would return and keep their Ashes hopes alive. The rain did arrive, delaying play for three hours during which the ground staff worked tirelessly with blower vacuums to get the pitch dry. The two captains were locked in dialogue with the umpires as the day wore on.

By 1pm, play had resumed, much to the chagrin of Root and his weary men. The England skipper’s sense of impending doom was amplified when the Josh Hazelwood clean bowled Jonny Bairstow with the first delivery of the day. Australia immediately started tightening the screws. The bowlers pummelled the pitch with deliveries that ripped off the deck violently swinging and bouncing out of control.

A Hard Day for England

Moeen Ali managed to soak up 56 balls before Nathan Lyon trapped the England allrounder with Leg before Wicket, making it the fifth dismissal of Ali this series. While hopes rested on Mitchell Starc to do a bit of damage, he was hampered by a bruised heel which could be influential in the upcoming boxing day test.

The job of despatching the top order fell to Hazelwood. He was able to remove the last of the top-order batsman, Dawid Malan for 54 runs. Malan put up a brave fight but was eventually caught down leg side. As is usually the case, Australia was able to wrap up the tail with little fanfare. Craig Overton edged his delivery into the capable hands of Hazlewood while Stuart Broad gloved a bouncer from Pat Cummings.

Another quick bouncer smacked Jimmy Anderson on the side of the helmet but he was able to resume and simply delay the inevitable. The match ended when Chris Woakes guided a Pat Cummings ball directly into the hands of Tim Paine. The massive innings defeat marked a massive turnaround after England won the toss and were sitting pretty at 368 for 4 in their first innings.