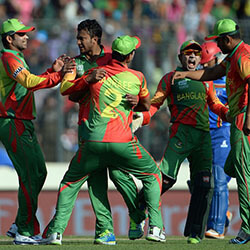 Despite losing their first T20 by eight wickets, Bangladesh has returned to following their 2-0 win for the Tests, and their 2-1 win for the one-day internationals. Captain Shakib Al Hasan was the star of the match as he managed to claim a personal career-best of 5-21 for his team who went on to beat the West Indies by 36 runs, levelling their three-match Twenty20 series 1-1.

Shakib also managed to provide a number of important late runs when Bangladesh went up to bat first, with his 26-ball 42 studded with five fours along with one six that lifted them to a much higher 211-4, which is also their second highest T20 total for a day-night match.

West Indies was left behind at 98-3 by the time the 11th over had finished, until Shakib took three wickets in eight deliveries thanks to his left arm spin. The West Indies were all out for 175 in 19.2 overs.

Shakib, speaking after the match, said that it is always special to be able to contribute to a team’s victory, whether it’s for batting or bowling. He added that five wickets don’t really matter, and what matters is that they won an important game. Their next game will be the series-deciding third for this year’s T20. Shakib was also the only third Bangladeshi bowler to take five-for in T20 after Elias Sunny back in 2012, and Mustafizur Rahman in 2016 by bowling Fabian Allen for a duck.