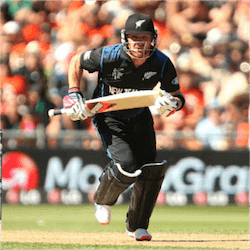 Unbelievable scenes transpired at Eden Park as the Black Caps claimed a thrilling six-run win against Australia in the opening match of the Chappell-Hadlee Series on Monday. Chasing a mammoth target of 287 runs for victory, Australia appeared down and out at a paltry 67 runs for the loss of six wickets. This was until all-rounder Marcus Stoinis stepped up to bat. In only his second one-day international game, Stoinis took the Aussies to the brink of one of the most impressive comebacks in cricket history.

On his own, Stoinis hit an impressive 146 not out off 117 balls. His impressive knock included a total of 11 sixes to pull the visitors out of the muck and very much into contention. However, a superb runout from Black Caps captain Kane Williamson left Stoinis on his own with no one left to bat out the innings. The runout of Josh Hazelwood at number 11 seal the fate of the Australians in the 47th over.

It was a bit of a let-down for Stoinis who was feeling mixed emotions after the match. Speaking to the press, Stoinis commented on his tremendous knock saying that it was a feeling that he should enjoy. However, a win was the team’s number one priority and there were more than a few sad faces in the changing room. The first game of the series set the scene for an unmissable second game to be held in Napier on Thursday. New Zealand are poised to reclaim their silverware they handed over to the Australians after a 3-0 whitewash in December.

A Comeback of Epic Proportions

For New Zealand, an impressive knock of 73 from Neil Broom at number 5 and an inspired 61 from opener Martin Guptill got the Black Caps to a good start. A further 48 attacking runs from Jimmy Neesham at number 6 got the hosts to a respectable score of 289 runs for the loss of nine wickets. A blitz of wickets from bowler Trent Boult put Australia on the ropes with a double wicket haul in the fourth over.

With wickets tumbling around them, the Australian side were all but done for until Marcus Stoinis stepped up to the crease. A mammoth knock of 146 runs took Australia closer and closer to the seemingly unobtainable target. With his fellow teammates dropping around him, Stoinis took the game into his own hands, steading the ship for Australia. With three overs to go and the Australians looking to pull off an epic comeback, Kane Williamson executed the perfect runout in front of thousands of screaming fans to claim the win and go one up in the series.