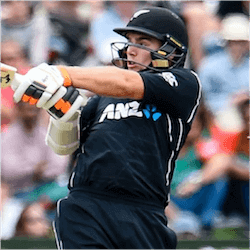 New Zealand cruised to a four-wicket victory over Bangladesh in their build up to the Champions Trophy. The Black Caps finished off with 15 balls to spare in a ground record chase that saw the Tigers fall at Clontarf in the Northeast of Dublin. Bangladesh reached a solid total of 257 for the loss of nine wickets after being sent into bat. Of the 21 previous One Day internationals at the venue, the previous highest successful run chase was 230 by Pakistan against Ireland in 2013.

With these numbers in mind, the Tigers were feeling somewhat confident as New Zealand took to the wicket. The Black Caps proved their worth though, delivering a solid batting performance, perfect execution and a string of steady partnerships. It was the Captain, Tom Lathan who provided the backbone of the innings, with a solid 54 runs of 64 balls. More partnerships of 39, 41, 30 and 37 injected momentum into the side before Jimmy Neesham got to the wicket.

Eventually claiming man-of-the-match, Neesham showed his experience with an impressive 52 runs off 48 balls. He also took two wickets for 68 runs in nine overs. Neesham batted aggressively, racking up an 80-run fifth wicket stand with Neil Broom who ended on 48 from 65 balls. Bangladesh got the match up and running with an impressive opening stand of 72 inside the first 15 overs. New Zealand always knew they were in it though as the slow wicket enabled the bowlers to take the pace off the ball.

The highlight for New Zealand was the maturity of the spinners including Ish Sodhi with figures of 2 for 40 and Michell Santner with 1 for 35. The two were able to restrict the Bangladeshi run rate in the key stage of the game. These were the same two blowers who were instrumental New Zealand’s first game in over Ireland. Tom Latham’s attacking approach worked well, with Luke Ronchi holding up his end with the gloves. Ronchi was rewarded for his efforts with a catch that ended the run of Bangladesh Captain Mushfiqur Rahim as well as a crucial runout of Mashrafe Mortaza.

In the batting line-up, Ronchi also proved his worth with a zippy 27 runs from as many balls. Rahim also got stuck in with 55 from 66 balls. He was able to use the full depth of the crease, sweeping away anything short of a length.