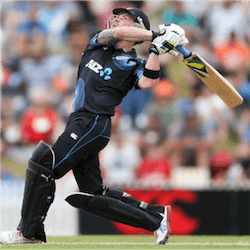 It seems that New Zealand’s preparations for the Champions trophy are going according to plan. This is after the Black Caps clinched the tri-series cricket title with yet another win over Ireland. While some might scoff at their success, we have to remember that New Zealand have only ever picked up five wins in a series comprising of more than three teams.  History shows us that the Black Caps have not had a good a run as people think.

We just have to remember the Bank Alfalah Cup in Sri Lanka or the NatWest title or even the Videocon series in Zimbabwe. After hamming Ireland with a whopping 190 run victory, New Zealand just have one more game against Bangladesh to achieve a clean sweep. While the team can only play what they have been given, there is something to be said for playing matches where the opposition tests the team just a little, but not too much. With that in mind, New Zealand will look for the positives from the tri-series.

A Thought for the Champions Trophy

Captain Tom Latham is first up in the spotlight. Latham led New Zealand to a resounding 344 runs against Ireland with a run-a-ball century. In the past 25 One Day, Internationals at home, the Captain has averaged a score of 22 with just a single century. As soon as he gets on an international flight, the statistics rocket up to an average of 39.82 with three centuries and a total of six fifties.

While all the batsman had a good chance for time on the pitch, Colin Munro offered and interesting contribution, one worth thinking about. Munro is not part of the Champions Trophy squad but will be on standby if needed. Against Ireland, Munro racked up 44 runs of just 15 balls. He was also able to oversee a total 76 runs for the final 5 overs to give the Black Caps a late push.

Ireland didn’t really have a hope of being able to chase down New Zealand’s score. Many IPL players are still making their way back into the squad before they take on India in the first of two official warm up matches. As the Champions Trophy draws near, New Zealand will have a tiny bit of wiggle room for changes. The Black Caps play their opening pool game against Australia on the 2nd of June.