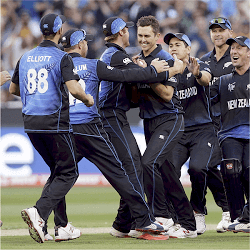 Reasons the Black Caps can be Optimistic about an Australian Win

The last One Day International, or ODI, between New Zealand and Australia went awry around 31 minutes after the coin toss. The unfortunate events which led up to the World Cup Final in 2015 resulted in a damp squib for New Zealanders.

Aside from that game, the last time the Black Caps played an ODI cricket match against Australia was early in 2009. The deciding match was washed out, which led to the series being drawn at 2 – 2. In the rain-affected match, New Zealand needed only 33 runs off six overs in order to win, with Brendan Diamanti and Martin Guptill well-set at the crease, but unfortunately the weather had the last word.

Thanks to their 2 – 1 victory in New Zealand last summer, the Black Caps currently hold the Chappell Hadlee Trophy, and there are a number of reasons to be hopeful about New Zealand’s chance of a win next week. David Leggat has given a few reasons why New Zealand is likely to fair well in the upcoming series against Australia, and these are all centred on the Black Caps’ strength in a number of different factors of play.

Depending on how New Zealand decides their batting line up in each of the upcoming games, they will have a lot of hitting potential thanks to the decent depth of available batsmen. These options include Guptill; Munro; de Grandhomme; Neesham, and each of these fine players are more than capable of clearing the boundary.

Craig McMillan, the batting coach for the Black Caps, stated this week that batsmen will be given free reign from the word “go”, and this mindset has already been instilled in the nets. Due to the number of all-rounders in New Zealand’s line-up, they will be able to bat deep no matter who gets picked.

A Good Captain Leads the Team

Kane Williamson is a quick learner, and is reaping the rewards of just how much cricket is being played on the international circuit nowadays. His run-consistency forms a crucial part of New Zealand’s upturn in the world of cricket, and, with a fifth ranking on the ODI batting positions, his record confirms his continuing development as a batsman.

The Fact of the Black Caps’ Formidable Fielding

Fielding sharply is a given these days, and teams unable to keep up to speed with this aspect of play are sure to lose more often than win. New Zealand’s close infielders are exceptionally quick, and the Black Caps outfielders all have great arms. There are very few weak links in the Black Caps chain –and this is a good thing, considering how slick the Australian team is in this aspect as well.