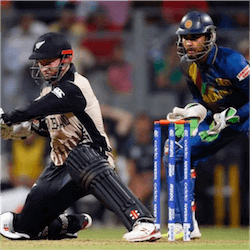 New Zealand has claimed another reassuring win against Sri Lanka in their final warm-up match at Edgbaston before the Champions Trophy officially gets underway. The Black Caps easily reached 359 runs for the loss of four wickets in reply to Sri Lanka’s innings of 356 for eight. While everyone in the team had something to offer, the highlight of the match was Martin Guptill’s 116 runs of 76 balls. Kane Williamson followed Guptill’s lead, hitting an impressive 88 of 60 to make a up second wicket partnership of 157 runs from just 94 balls.

In a testament to how well the two were playing, both batsmen were retired in order to give the rest of the team a bit of batting practice. A fifth-wicket partnership of 84 gave the side some acceleration at the death with Neil Broom scoring 37 off 38 and Corey Anderson hitting a half-century off 36 balls. New Zealand were able to reach Sri Lanka’s score with 23 balls to spare at the same venue where they will play their opening match against Australia in the in the Champions Trophy.

If this match is anything to go by, the Champions Trophy could be seeing some seriously big totals on flat wickets. That being said, the match was not an official ODI, with teams given the opportunity to test all parts of their squad. New Zealand ended up using 14 players with Luke Ronchi the only player rested for the big game. He was replaced by Tom Latham who racked up 44 runs from 49 balls and played the role of the wicketkeeper.

To Spin or Not to Spin?

The battle for second opening batsman alongside Martin Guptill is still up for grabs. Ronchi seems to have the upper hand at this point, having opened in five previous matches with a top score of 66 runs. In the bowling department, New Zealand used nine bowlers with Adam Milne and Trent Boult taking on the early overs. Milne had a slightly better over rate than Boult, taking 1 for 48 from eight overs. Time Southee also got in on the action, picking up two wickets for 48 runs from eight overs.

The Black Caps still have to weigh up whether they want to play two spinners in the tournament. Against Sri Lanka, Mitchell Santner had figures of none for 34 from 6 overs while Jeetan Patel was slightly more expensive with none for 48 from 6 overs.