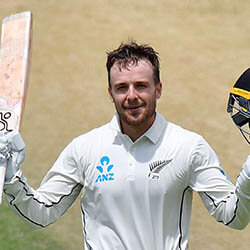 Blundell scored his second Test century and opened the innings for the first time since being called up to play for the Caps for the first Test in two years on the 29th of December this year. He’s become the first New Zealand player to reach three figures in the Series and the first to do so at the Melbourne Cricket Ground. He was also the final man to be dismissed, for 121, when his squad was bowled out for 240. The Black Caps lost the Test by 247 runs.

Blundell showed tremendous fight in the game, but he was not doing it entirely for the Black Caps. Part of his message was for Hollie Beattie, a little girl who’s undergoing something far more difficult.

The multi-coloured batting grip Blundell was using on the field was in support of Beattie, who is battling cancer. It was designed by the young girl along with Kookaburra, and Players Sport is selling it to help raise money to fund her medical costs. Kookaburra got Hollie’s input regarding the colours and the youngster also had a hand in designing the waves of colour.

Neil Wagner, Blundell’s teammate, also used the grip when he played in Melbourne, and Tim Southee donated a Test shirt signed by the whole squad to the cause.

John Beattie, Hollie’s dad, is a Players Sports Foundation Staff member and the firm has been retailing the grips for 9.99. Her father said the players’ actions have left him humbled and grateful.