Champions Trophy Could Be Replaced By T20 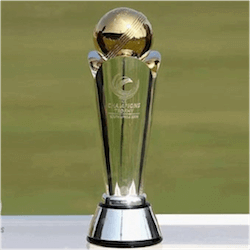 Could This Be the End of the Champions Trophy?

The ICC Champions Trophy could be yet another 50-over tournament replaced by the more popular T20 format. Held every four years, the Champions Trophy is a 50 over cricket tournament recently won by Pakistan who beat India by 180 runs in the final. India is scheduled to host the next Champions trophy in 2021. However, there are moves in play to replace the tournament with another T20 world event.

If this happens, the Twenty20 format will have two world tournaments in play within a four-year cycle. As it stands, the Champions Trophy is a competition that is restricted to the top 8 cricket paying nations. For this and number of other reasons, it is one of the most exciting tournaments for both the players and the spectators. For starters, the tournament is short, with the most recent being 18 days from start to finish. Since all the nations taking part have something to offer, spectators will not be left with “dud” or uneven matchups.

Now there is talk of T20 cricket enlarging from its current format, which consist of 10 teams. The idea is to have two qualifying groups of four to find as many as 20 teams, in an effort to give the lower tier nations a chance to compete. In some ways, this is a great idea, but in practicality, it could mean the loss of bigger competitions. Speaking to the press, ICC chief executive Dave Richardson said that the ICC has considered swapping out the Champions Trophy for a World T20 competition.

Expanding of the T20 Format

According to the ICC, T20’s attract a lot of interest and generate significant revenue for the television companies. The ICC said their main reason behind the idea is to give more cricket teams a chance to compete on an international scale. Down the line, the ICC would ideally like to have a 16-team or even a 20-team World T20 competition. As such it might not be necessary to continue with two 50-over tournaments with the Champions Trophy being one with its head on the chopping block.

Meanwhile the Cricket World Cup is set to be trimmed town to just 10 teams for the upcoming 2019 event in England. According to Richardson, the reduction was to increase the competitiveness of each match and the overall standard of World Cup cricket. But with this reasoning, would it really be a good idea to axe the Champions trophy and double the number of T20 teams?