A Clean Sweep For NZ Against The West Indies 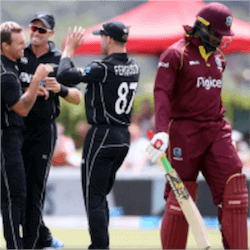 The final Twenty20 international at Mt Maunganui is one the West Indies would rather forget. Thanks to a cracking century from Colin Munro and a fired-up NZ side, the Windies crashed out yet again, making it zero for two and a disappointing tour overall. As for the Black Caps, it was a game where records tumbled and the batsman shone. Never has a New Zealand side beaten an opponent by so many runs in a T20 format.

Then there was Colin Munro. The 30-year-old managed to knock up the fastest T20 century for New Zealand, needing just 47 balls to reach the milestone. Smashing a total of 104 of 53 balls, Munro received a standing ovation from the crowd and made a significant contribution to the record breaking 243 runs the side managed to put together. This well overtook the previous record of 214 against Australia in 2010.

Munro was eventually caught by Shimron Hetmyer off Carlos Braithwaite, but his contribution was momentous. Munro also became the first player in history to score three T20 International Centuries. He overtook Chris Gayle, Rohit Sharma and Brendon McCullum who sit with two apiece. New Zealand’s innings also produced a flurry of bounties, with every single batsman getting in on the action. Monroe himself slotted away 10 sixes, equalling the record set by Corey Anderson in Bangladesh. Sharing the wicket with Guptill, Monroe was also involved in the second highest first-wicket partnership in a T-20 format.

It was a return to form for Guptill who smashed 63 runs from 38 balls. Recovering from a hamstring strain, 63 remains his highest score in any format this past season. In total, there were seventeen sixes smashed into the crowed, giving the stadium plenty of opportunities to extend their hands for the $50,000. The visitors didn’t make it easy on themselves though. Wayward bowling was the order of the day. This was exemplified by the four wides in the 10th over off of Braqithwaite’s bowling.

A Dismal Performance by the West Indies

In reply, the West Indies managed to scrape together just 124 runs in 16.3 over. While Shai Hope was out due to injury, there was no real hope for the visitors. Walton’s day got even worse when he was dismissed from the very first ball of the innings, while Chris Gayle ducked a delivery by Southee then looped up a catch to the wicket keeper.

The most resistance New Zealand got was from Andre Fletcher who managed a respectable 46 runs from 32 balls. He was eventually undone by a googly by Ish Sodhi, which shattered the stumps and brought the crowd to their feet. The pick of the bowlers was Tim Southee which three for 21 from 2.3 over.