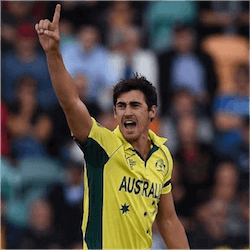 Sheer Brilliance from Mitchell Starc in the Sheffield Shield

If the Sheffield Shield is anything to go by, the upcoming ashes test is going to be pretty tough going for the Brits. Heading up the attack is Mitchell Starc, the man who just became the first bowler in over 40 years to pick up two hat tricks in the same first-class match. Starc achieved the remarkable feat by blasting out Western Australia to claim a convincing victory for New South Wales at the Hurstville oval.

On day three of the Sheffield Shield match, Starc repeated his brilliant performance with the wickets of Berhrendorff, Moody and Simon Mackin in three successive balls. Starc’s double hat trick was the first since Amin Lakhani achieved the astonishing feat against India back in 1978. To date only seven other bowlers have managed to rack up two hat tricks in the same match. Speaking to the press, captain Steven Smith said that the reversing ball and Starc’s strange angle from around the wicket made it difficult for the batsman to read.

The destructive power of Starc’s bowling and his ability to clean up the tail enders meant that New South Wales had a good chance of winning on the final day of the Sheffield Shield match. His bowling was only matched by an outstanding batting performance by Cameron Bancroft who put on 76 runs in the first innings and followed it up with 86 runs on the final day. Together with Shaun March, Bancroft is a top contender for middle order in upcoming Ashes test.

After the dismissal of Bancroft, Hilton Cartwright had a poor time of it. His dismissal by Pat Cummings on 2 was a blow for the allrounder who is under the scrutiny of the selectors for the upcoming Gabba Test. Mitchell March, also had a bad day at the office, falling cheaply to Josh Hazelwood. Wells and Berhendorff made a brave stand for WA, taking the match into the final hour before Starc destroyed the tail with yet another hat trick to give NSW the win.