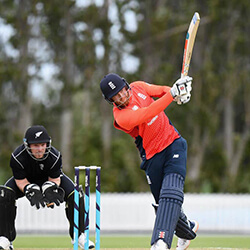 England collapsed to a 14 run loss in their third Twenty20 taking place in Nelson as New Zealand took the lead with 2-1. Chasing 191, England were sitting at 139-2 with 31 balls remaining, and were seemingly on their way to victory before they lost 5-10 in 18 balls. Colin de Grandhomme claimed 55 in New Zealand’s 180-7, while Tom Curran took 2-19 and Matt Parkinson 1-14 for his debut game. The fourth game of the five match series will be taking place in Napier.

With England looking as though they’ll emerge victorious, captain Eoin Morgan was caught mid wicket off of the final ball during the 14th over. Sam Billings was run out second ball by a solid piece of fielding from Colin Munro before James Vince picked out the mid-off to fall back to 39.  Lockie Ferguson was able to dismiss Lewis Gregory and Sam Curran in the 18th over, and the English side was ultimately unable to recover.

England’s chase began off strong with Tom Banton, making his debut, and Dawid Malan claiming 25 off of the first two overs. Malan batted well for a 34 ball 55, but was dismissed by Ish Sodhi Martin Guptill. Malan’s dismissal gave Vince the chance to push forward as he was struggling at less than a run a ball before the start of England’s chase. They were set to victory after partnerships between Malan, Vince, and then Vince and Morgan saw them earn 63 and 49.