England The Victors At T20 Clash 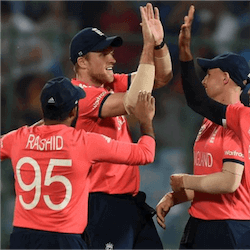 Despite an oppressively hot day, England easily sailed to victory against a lack lustre South Africa in their T20 International held in Southampton.

The team looked very loose and relaxed making their victory seem almost effortless. They surprised many fans with this confident performance after the beating they took from Pakistan earlier in the month.

South Africa won the coin toss and chose to bat first, only chalking up 141 for 3 wickets. The bowling duo of David Willey and Mark Wood did the most damage against the Proteas who were pinned down to 32 for 3 in the first 5 overs.

By the time England’s spinners came on the field, South Africa’s batmen were under too much pressure and they caved 30 runs short of a decent challenge for England.

Liam Dawson and Mason Crane kept the team of De Villiers and Behardien trapped with the duo conceding 49 runs in 8 overs. Perhaps England’s weak showing against Pakistan caught the Proteas off guard and under prepared.

The star of the show for England was definitely batsman Jason Roy. He punished South Africa right from the start scoring 3 fours and 2 sixes from his first 14 balls. SA bowler Wayne Parnell conceded 28 runs in his first 4 overs.

South Africa responded with bowler Andile Phehlukwayo who helped put some pressure on England, trapping Roy in a 13 runs for 4 overs set. Unfortunately Alex Hales and Jonny Bairstow came onto the field and smashed an easy 98 for England to take the match. Bairstow took the Man of the Match award for his 60 not out score.

Take Aways From The Match

There were many mistakes made on the South African side. Sloppy fielding from Phehlukwayo and Farhaan Behardien cost the team dearly.

Their greatest success came with De Villier’s 65 not out and Behardien’s 64 not out. There was a definite lack of urgency from the South African side however. Both batsmen found 4 boundaries and 2 sixes but that was over 50 balls each.

That simply does not cut it in a T20 match. Even if the team suspected a poor performance by England, they would have only matched this suspected performance, rather than over shadow it.

This match may have been the match to light a fire in England’s belly. South Africa however needs to take a long hard look at their team and tighten up their play.