England Vs. Australia: The first of the T20’s 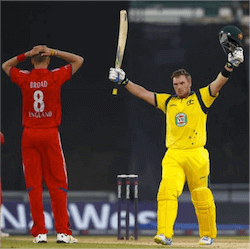 Cricket enthusiasts will be well aware of the fierce rivalry between England and Australia. One need only to look at the Ashes to comprehend just how much the 2 commonwealth nations pride themselves on being the best. We have already gotten a taste of the action so far with the Test series kicking off in November followed on by the 5 match ODI series. In less than a week’s time, the 2 sides will clash again in the first of the 2 T20 matches.

Some would argue that Australia are more adaptive to the 5-day format than the big-hitting antics of Twenty20 cricket. Looking back at the Test series, Australia completely dominated the longer version of the game winning 4 out of the 5 matches and drawing the 5th. England didn’t even get a chance to sniff victory. Conversely, England showed great resilience in the ODI series, taking the 1st, 2nd and 3rd matches without much resistance from Australia. It was only in the 4th game that Australia finally got 1 back before England scooped up their 4th win to take the series 4-1.

While one cannot directly compare ODI’s or Tests to Twenty20 games, it is looking more likely that England are prepared for the shorter, faster cricket game with pinch hitters and sloggers showing their colours when it counts. Many Australian cricket fans will no doubt be at odds with this prediction simply by looking at how many players got picked up at the IPL auction in January. One would assume that Australia has some pretty powerful weaponry at their disposal.

How the Teams Stack Up?

All we can do for now is look back at the statistics and decide which team wants it most. England and Australia played their first ODI together back in 2005. Since then, the 2 sides have gone head to head in a T20 format a total of 13 times. Of the 13 games, England have won 5 while Australia have won 7. So there is not much in the stats. In terms of total winning percentage against all cricket nations, England have a win percentage of 50.54% while Australia are slightly ahead on 52.12.

The 1st T20 match will be played on the 7th of February at the Bellerive Oval. Having the home ground advantage, Australia should have the psychological upper hand and the fans to back them up. 3 days later, the second game will be played at the MCG before New Zealand get a crack at the Brits in Wellington.