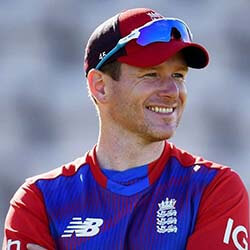 Even though England has on numerous occasions over the years reigned victorious over the New Zealanders, they were no match for the daring and flamboyant antics of Jimmy Neesham. The hard-hitting batsman, who played a swashbuckling game at No. 6, sent off three sixes on his way to an impressive 27 runs off 11 balls.

This was the first time Neesham had played such a hard and decisive game, said Morgan after the match, which he said took England by surprise.

Morgan said the hardest thing about the match had been to end up on the wrong side of an intensely close final score. He said England were probably ahead in the game before Neesham stepped up to the wicket.

Aside from Neesham, proving an extreme challenge for the English squad had been the nature of the pitch. Morgan said while the hitting ability within the squad remained as strong as ever before, the ball simply wasn’t coming on to the bat in the way it should have.

Commenting on the disappointing loss on Wednesday, England head coach Chris Silverwood said it sometimes becomes necessary to make peace with the fact that somewhere along the line, someone is going to “get you”. For England, that’s precisely what Neesham had managed to do in flawless fashion.

The Black Caps T20 squad will next face the winner of the game between Australia and Pakistan when they head into the final on Sunday.