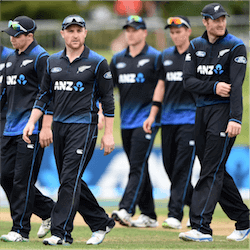 The upcoming Champions Trophy will give fringe New Zealand cricketers their chance to play in the national side. For some players it will be a return to the team, for others it will their first taste of national honours. While this is an excellent opportunity for the Black Caps to test the depth of their team, we have to remember that a full 10 players will be tied up with the Indian Premier League.

What this means is that while we can be expected to see some excellent young talent, this will not be a full-strength New Zealand side facing Ireland and Bangladesh in the upcoming Champions Trophy. Some of the side choices may seem intriguing while others we know are based on performances in the domestic season. There is also a chance for players to re-state their claim on the side. Chief among them is wicketkeeper Luke Ronchi.

Ronchi Back in Action

At this point in time, Ronchi is likely to take over the role of wicketkeeper ahead of Tom Lathan. He might also get a chance to have a crack at batting at the top of the order. Although, when last given the chance four years ago, he scraped together a paltry 47 runs in six innings. As expected, Tom Latham will be taking on the leadership role while Kane Williamson does his duty for the Sunrisers Hyderabad. Also included in the side is seam bowler Hamish Bennet who played his last ODI three years ago. Coming in uncapped is Seth Rance, the highly rated seamer from the Central Districts.

Sitting on the cusp of ODI selection is Rance’s provincial teammate George Worker. While he has not done enough to be included in the selection, a good performance in Ireland could see him joining the Champions Trophy squad. Speaking to the press about the newly named squad, national selector Gavin Larsen said that it is a fantastic opportunity to give new players a chance to play international cricket.

The Champions Trophy will give youngster Scott Kuggeleijn the chance to develop his game while Neil Wagner will make the transition from test regular to ODI debut. Of all the players joining the side, Colin Munro has garnered the most attention. His form in the Plunket Shield was nothing short of amazing with a total of 685 runs in just six matches at an average of 85.62.