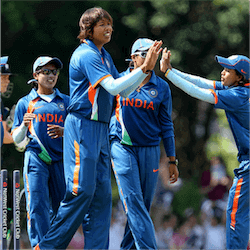 But sports betting fans will still have an eye on the ICC Women’s World Cup Qualifier in 2017, currently underway in Colombo, Sri Lanka. The 10-team tournament will decide the final four nations to compete in England this June and July.

With four group-stage matches left to play on Monday, at the time of writing only two teams had definitely qualified for the Super Six Stage, starting on Wednesday: India, unbeaten in three games at the top of Group A, and South Africa, likewise victorious in three matches in Group B.

Sri Lanka Likely to Go Through

Hosts Sri Lanka lie in second place in Group A, but their Monday match against Thailand should not prove a major obstacle. Although the Sri Lankans were soundly beaten by India, they scored a convincing win over Ireland and an eight-wicket triumph against Zimbabwe.

Thailand, on the other hand, lost to both Zimbabwe and Ireland, and were thrashed by nine wickets against India. The final Group A match on Monday is between Zimbabwe and India, but the African team would need as massive upset win with an extraordinary run rate to unseat Sri Lanka or Ireland from the Super Six.

Pakistan Looks Secure in Group B

Although it can’t be confirmed until they play their final Group B match against Scotland on Monday, it looks like Pakistan will finish the group stage second to South Africa; the only team to beat them so far. It’s highly unlikely that the South Africans will lose to Papua New Guinea on Monday, so they should enter the Super Six with a perfect record.

Bangladesh looks likely to fill the third Super Six spot in Group B, after losing to South Africa and Pakistan, but beating Scotland and Papua New Guinea convincingly. It would take another huge shock result, either Scotland beating Pakistan or Papua New Guinea defeating South Africa, to upset that applecart.