India Fail With Bat And Ball Against NZ 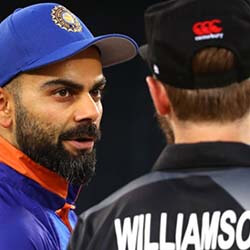 They’re the undisputed masters of T20 cricket as a sporting format, and yet, India are on the verge of an early World Cup exit after only a couple of matches.

India spent the biggest part of Saturday’s match against New Zealand signing off on something of a peacemaking with the reality now staring them in the face. While victory would not have meant a semi-final appearance guarantee, their losing tally of 110 means that goal is practically now out of reach.

According to T20 giant and captain Virat Kohli, it had been a losing battle right from the start. Kohli, who this year plays his final year as T20 captain for India, said even India’s body language created an advantage for New Zealand. Kohli said the team weren’t brave enough either with the bat or the ball, which according to him, had really been quite bizarre.

While New Zealand’s bowlers certainly deserve recognition for restricting their opponents to 110, India’s lack of ambition had been glaringly obvious. So much so, that at one point in the match, they’d gone 71 balls without hitting even a single boundary, which is very much the opposite of their usual style.

Pace bowler Jasprit Bumrah put India’s poor performance down to bubble fatigue. He said sometimes doing the same thing over and over again can lead to mental fatigue and a lack of drive.

India will next take on Afghanistan on November 3, followed by a clash against Scotland on November 5.