India on Fire Ahead of ODI Cup 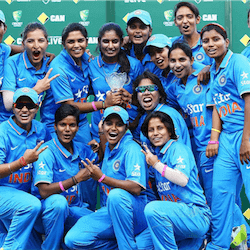 The Indian Women’s cricket team looks to be a serious threat at this year’s One Day International World Cup For Women.

The ace in the hole for the team seems to be new player Deepti Sharma.

In a recent match against Ireland, the 19 year old broke records as she became the 2nd highest scoring female cricketer in an ODI with an amazing 188 from 160 balls.

This puts her just behind Australian Belinda Clark, who holds the record of 229 runs.

Facing Off In South Africa

India is currently playing the Quadrangular series in South Africa. They went up against Ireland when the player reached her record run total with 27 boundaries and 2 sixes.

She also had another record as the youngest player to score more than 175 runs in an ODI for women and men. Her teammate Poonam Raut backed her up with 109 off 116 balls.

This powerful opening due can have huge repercussions for the other teams at the ODI World Cup for Women.

Another feather in the team’s cap is fast bowler Jhulan Goswami. She also broke records in the Quadrangular series when she became the leading wicket taker for ODI games.

Goswami broke the record when India was facing South Africa. Goswami ended the match with 3 fort 20 made during 7.3 overs.

Goswami has taken 271 wickets across international cricket formats and she was honoured in 2007 with an ICC women’s cricket of the year award.

Another strength for the team is the consistency of the team composition that has remained pretty much unchanged in the last months. This is especially true now that Smriti Mandhana made a surprise return to the team.

She was recovering since January from a knee injury that she received while taking part in the Big Bash.

She makes her return just in time for the ODI World Cup for Women that kicks off at the end of June. India will face an immediate challenge when the Cup starts as their first meeting is against England in Derby.

With the stellar performances of the team members so far and the practice and preparation offered by the Quadrangular series, India’s prospects are looking very good.