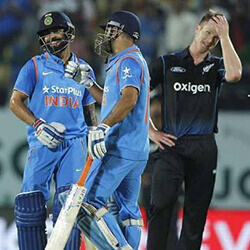 New Zealand are set to host teams from Asia, including India, Bangladesh, and Sri Lanka during the 2018-19 home season that will be played from December to March. The India tour is expected to be particularly significant as both the men’s and women’s teams will be part of three T20I double-headers, which will be taking place in early February. The Indian teams will be heading to New Zealand after their respective ODI series.

The men’s teams of New Zealand and India are set to feature in an ODI series of five matches, which are set to start in January, and will service as preparation for the 2019 World Cup. The women’s teams, on the other hand, will be fighting it out in three ICC Women’s Championships matches that will identify seven qualifiers for the 2021 Women’s World Cup, that will be held in New Zealand.

The six women’s matches are to be televised live, which is a first for New Zealand. The country’s international summer games will begin with two tests against Sri Lanka, which are to be played in Wellington. This will be followed by the Boxing Day Test in Christchurch, after which they are set to take part in three ODIs as well as one T20 in January.

Once India has completed its tour of New Zealand, the hosts will be matched up against Bangladesh for three ODIs, followed closely by a three-Test series, which will be the first in history to take place between the two teams.