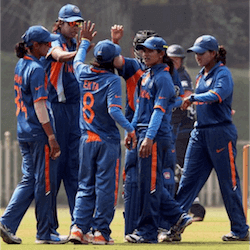 India has announced the line up of their 2017 ICC World Cup Qualifier squad. The announcement comes after the decimating performance of India in the Asian Cricket Council’s T20 event for women. This was their sixth victory at the event.

The squad is amped and ready for their first performance at the World Cup Qualifier starting on the 3rd of February. The captain is Mithali Raj who won the award for the Player of the Tournament in their Asian Cup performance. She will be assisted by her second in command, Harmanpreet Kaur who made a name for herself after a fantastic Big Bash league performance.

Fan favourite Sukanya Parida will also be joining the squad.

She made her debut for the squad in June 2012 but has only managed to score a total of 47 in her 8 ODI performances.  Her match high is 22 runs with a single wicket taken in her professional career.

India has had a great run in cricket so far. They have had a 7 ODI unbeaten streak having defeated Australia, Sri Lanka and the West Indies.

India’s first match this year will be a warm up match against South Africa on the 5th of February, followed by their first Qualifier match the 7th of February.

India will join Group A and be up against Sri Lanka, Ireland, Thailand and Zimbabwe. There are four more positions available in the World Cup after New Zealand, West Indies, Australia and England have qualified.

The finals of this year’s ICC Women’s World Cup are to be played in Britain. It is set to run between the 26th of June and the 23rd of July.

The final will be hosted at the legendary Lord’s cricket ground. Taunton and Leicester are hosting the qualifying matches while Bristol and Derby are hosting the semi-final. Excitement is running high for this year’s matches. New Zealand, Australia and India are all showing great promise with the athletes pulling out all the stops.

Once the teams have powered through the group stages and the final four spots for the world cup have been grabbed, the World Cup will be in full swing to the delight of cricket fans everywhere.