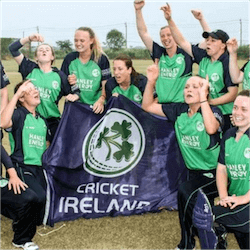 They will be heading to Sri Lanka soon to compete for a position in the finals. She will be fighting for one of the open spots to get Ireland into the finals.

Australia, New Zealand, West Indies and England have so far already qualified for the finals which mean there are only 4 more spots to fill. The competition in Sri Lanka will be fierce as it will be the final push by all teams to make it into the World Cup.

Delany has said that they will be focusing on certain teams that they have had a strong showing against in previous matches. In the summer the Irish team had defeated both South Africa and Bangladesh twice each.

Delany said what made these matches a win for Ireland is the fact that they approached the game with a clear mindset. They used their batters and bowlers to the best of their abilities.

Batters created productive partnerships and the bowlers remained focussed throughout the matches leading to victories.

She went on further to say that the current team has youth as well as experience on their side.

Many of the players in the current team line up used the off season to play in Australia where they further honed their skills and built up some more experience.

This combined with their victories last year has made the squad confident in their skills and abilities.

In further preparation many of the squad members travelled to Spain where they trained at the La Manga facilities. The whole squad has been in Sri Lanka since the 24th to train as preparation for the qualifier. The team is planning some warm up matches against Scotland and Bangladesh.

This will be absolutely essential for Ireland since the last time they played together as a team was in September last year.

Hopes are high for this Irish squad as they certainly have put the work in to make it through the qualifiers. Unfortunately they will be facing hungry and talented competition in Sri Lanka, putting their skill and hard work to the test.

They will be facing India, Pakistan, Sri Lanka, Bangladesh and South Africa in the qualifiers. They will face additional challenges form the climate which is why the training camp was in Spain and why they arrived in Sri Lanka early.