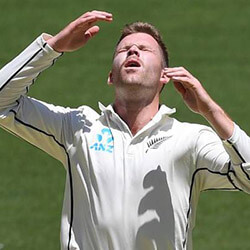 A partial stress fracture in the lumbar spine has Black Caps fast bowler Lockie Ferguson facing a six week-long stint on the sideline. But all things considered, since Ferguson will not need actual surgery, it could have been much worse, said coach Gary Stead this week.

Since the injury isn’t a complete fracture, Ferguson will need nothing more than a period of rest and rehabilitation, confirmed Stead on Wednesday, which means he has a good chance of making a successful return in time for Australia’s Twenty20 tour towards the end of February. He’s however likely to miss the Auckland Aces’ T20 Super Smash campaign. Should Ferguson’s rehab go as planned, there’s a definite chance for him to be playing again by the end of the season, explained Stead.

Ferguson acted a key figure in New Zealand’s national side’s run to the Cricket World Cup final of 2019. His temporary absence is a massive loss for the national side, added Stead on Wednesday. He’s had a massive impact in many of his matches recently played, and according to the national coach, his pace and accuracy add a strong and reliable support to the Black Caps’ bowling collective.

Though Ferguson’s temporary absence will undoubtedly lead to several challenges for the side over the coming months, Stead said the main focus point right now the big picture before the team, which is the Twenty20 World Cup and the several build-up matches leading up to the big event – matches Stead said will hopefully have the quick back and firing in no time at all.