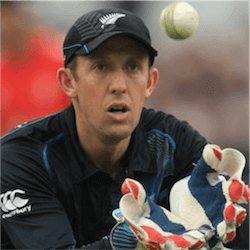 Luke Ronchi Back in Action

Local New Zealand wicket keeper Luke Ronchi will re-join the Black Caps for the first two ODI internationals against South Africa. Ronchi has been recuperating from a back injury, which he sustained during at T20 match in Mt Maunganui against Bangladesh last month. Speaking to the press, national selector, Gavin Larsen said that Ronchi is the number 1 white ball wicket keeper in the country. He went on to say that Ronchi brings a lot of experience to the group and was an easy choice.

Luke Ronchi will come into the 14-man squad replacing Colin Munro. At is stands, Munro failed to excite the selectors with a less than impressive performance against Australia. His departure also gives Jimmy Neesham the chance to bat higher up the order. Martin Guptill will also re-join the side after battling with a hamstring problem. He takes his place at the top of the batting order sweeping aside Dean Bownlie who actually hit his best ever ODI score of 63 in the second Chappell Hadlee match in Hamilton.

Guptill to Open the Batting

Guptill will sit out the first match at Eden Park just as a precaution before coming in to lead the proceedings. The rest of the team that orchestrated the 2-0 against Australia will retain their places in the side. In the bowling department, Mitchell Santer and Ish Sodhi keep their spots, adding two frontline spinners against an in-form South African side. Gavin Larsen explained that this would give the side an aggressive bowling attach which in the right conditions can work a real threat against South Africa.

The T20 squad sees the return of big hitter Corey Anderson while Tom Bruce will retain his spot in the shortened version of the game after his impressive century from 81 balls in the Ford Trophy playoffs. The T20 squad will not see the likes of Ross Taylor, which was to be expected. However, he will be playing a warmup game against South Africa to get a sneak peek at the South African bowlers before the test and ODI series.

The selection for the opener on Tuesday contains some of New Zealand’s best young cricket prospects. Henry Shipley gets a chance to show what he has will Glenn Phillips will make an appearance as well as batsman Daryl Mitchell and bowler Zak Gibson.