McClenaghan and Milne Back In The ODI Squad 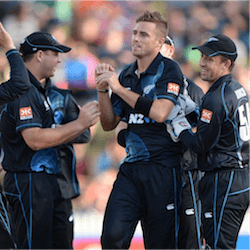 Milne and McClenaghan Back in the ODI Squad

The Black Caps are welcoming back Adam Milne and Mitch McClenaghan to the ODI squad for the upcoming Champions Trophy in June this year. The two fast bowlers have been plagued by injures for most of the year. The last time McClenaghan played in an ODI for New Zealand was in January last year. It was in the Wellington match against Pakistan that McClenaghan received a blow above the eye, putting him out of action for a while.

A few further injuries hampered his domestic career although he played a key role for the Mumbai Indians, putting them on top of the IPL with a massive 12 wicket haul. His ODI record is equally impressive, with 81 wickets in 48 matches with figures of 28.2. Fast bowler, Adam Milne has also missed out on playing for New Zealand since the T20 World Cup last year. At just 25 years old, Milne has been playing for New Zealand for seven years but has been played with injuries on and off for months.

Cory Anderson Back in Action

In the 51 One Day Internationals he has played, Milner has picked up 52 wickets at figures of 33. He also provides and extra bit of pace and is a much sought after outfielder. Milne plays for the Royal Challengers Bangalore and won his place in the side at the expense of Locki Ferguson who just completed his debut season. Another player who will be re-joining the side is Cory Anderson. The all rounder who plays for the Delhi Daredevils has had injuries problems of his own to overcome but will certainly be welcomed back into the squad.

Speaking to the press, coach Mike Hesson said that the three bowlers will add a lot of experience to the squad and that it is good to see them back in the park. The rest of the squad will remain unchanged with Tom Latham donning the wicketkeeper gloves, off spinner Jeetan Patel in the line-up as well as Mitch Santner and Luke Ronchi. There will be four fast bowlers in the mix as well as Jimmy Neesham, de Grandhomme with Anderson doing the job for the medium pace bowlers.

At first glance, the squad looks to be chosen with the IPL in mind. The players from the IPL have been in training since the end of the New Zealand cricket season and will be in peak performance for the upcoming Champions Trophy. New Zealand will kick off with pool games against Australia on the 2nd of June, England on the 6th and Bangladesh on the 9th.