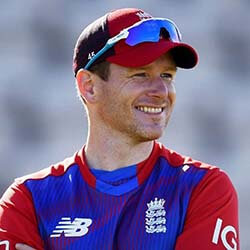 Eoin Morgan has pledged to drop himself from his English side rather than harm his country’s chances of success in the T20 World Cup.

Morgan lived a forgettable time in the recently concluded Indian Premier League while putting up a top performance of only 13 runs (not out) on the scoreboard for the Kolkata Knight Riders.

But while the KKR captain’s form has been sluggish for quite some time now, Morgan said he’s well aware of the fact and that given the enormous run-scoring potential currently in England’s possession, it may very well come down to him leaving himself out of the team altogether.

Morgan said he certainly won’t be standing in the way of a World Cup-winning side.

During a recent interview, Morgan said while he may have been short on runs in recent games, feels as though there’s been nothing amiss with his ability to captain and lead the way. Keeping his own batting performance on the pitch separate from his expertise as a skipper has been something both necessary and a trait he’s grown to be exceptionally good at, he said. Also despite his many challenges of late, he’s always come out standing on the other side of every obstacle.

Morgan also added that it’s the nature of T20 cricket to have to go all-in on high-risk options at times, and that those risks sometimes need to be taken. He said the World Cup and England’s chances is however not a risk he’s willing to toy with.