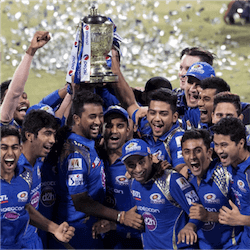 The Mumbai Indians defeated Rising Pune Supergiant in a sensational Indian Premier League final which came down to the last ball. Supergiant were looking good for the match but lost quick wickets in the final over thanks to the efforts of Mitchell Johnson who picked up 3 for 26. Chasing a total of 130 to win, Supergiant needed 11 runs off the last over; not a tall order by IPL standards.

After conceding a boundary off the first ball, Johnson dismissed both Manoj Jiway and Steve Smith with successive deliveries. 5 more runs came off the next three balls. On the last delivery Dan Christian was run out trying to tie the match. Speaking to the press, Mumbai Indians captain Rohit Sharma said that is was a brilliant game of cricket. To be able to defend a score like that in final was more than anyone could ask for.

With just three over left, Sharma had confidence that his bowlers would do the job. He told them to do whatever they wanted and set the field according to what they believed was right. After collapsing to a disappointing 79 runs for 7 wickets, a good knock from Krunal Pandya got them back on track.

Down to the Last Ball

Credit has to be given to the Supergiant bowlers. Jaydev Unadkat claimed two early wickets before Adam Zampa got the big wickets of Rohit on 24 and Kieron Pollard on 7. Lendl Simmons was dismissed with one of the finest catches in the tournament by Unadkat just above the ground. It all fell to Krunal to steady the ship and add a vital 50 runs partnership with Johnson before going out on the last ball.

Supergiant must have felt they had the match all wrapped up until they lost Mahendra Singh Dhoni in the 17th over. They quickly slipped to 89 for three and somehow found themselves needing 30 runs off the last three overs. Lasith Malinga gave away just 7 runs but Bumrah got hit for a six in the 18th bringing the target to 11 of the final six balls.

With the pressure building, Supergiant seemed to crumble. Tiwary hit straight to long on, losing his wicket before Smith attempted to clear sweeper cover and was caught by Ambati Rayudu. After the match Smith said that it was a disappointing ending for the team. It wasn’t the fairy-tale finish they had in mind.