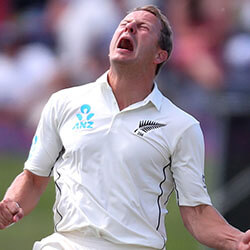 Neil Wagner has worked hard to earn his stellar reputation with the New Zealand Cricket team’s bowling line-up. In the same way that Kyle Jamieson menaces with his pacing and Tim Southee destroys hopeful batsmen with his superb swing, Wagner runs in and bowls bouncers each time! On even the most unruffled wicket, with no assistance from anyone else, Wagner does his level best each time, bowling with a hostility that is magical.

Most recently, at Mount Maunganui’s Bay Oval, he bowled 21 overs in the blazing heat and ended up taking two wickets for 50 runs. And he did it with so much aplomb that not one of the millions of spectators had the vaguest idea he was doing it all with a painful fractured toe!

A photograph of the destroyed digit was displayed on New Zealand Cricket’s official Twitter handle and it’s a sight to behold. Occurring from a toe-hit from Shaheen Afridi when Wagner was batting in the first innings, the player decided to grin and bear it over the course of what he describes as an incredibly challenging day of Test Cricket.

Wagner commented on his feat, saying he is proud of the fact that he kept his head, and fractured toe, in the game. He said that he always puts his team first and if there’s a way he can contribute, he will. He stated that he couldn’t face sitting on the side-lines with his foot up watching his fellows do all the work so he got through it as best he could!