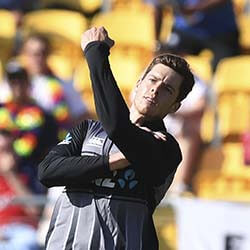 As the World Test Championship final comes closer and closer, cricket fans find themselves debating who will walk away with the championship title. After having played two Tests in England – and beating England in the second Test – New Zealand seems to be the crowd favourite to win.

Having not beaten the English team since 1999, their recent victory with a margin of eight wickets was a welcomed surprise. This has pushed the team into the number one spot in ICC Test rankings. And, when paired with the experience of playing in the host country’s trying conditions as well as the Duke ball, all provide the perfect backdrop for the New Zealand team to emerge victoriously.

Adding to New Zealand’s competitive edge is that they will have time to rest up and practice with the additional 1.5 days leading up to the final on 18 June 2021. The use of two left-armers as bowlers also provides a challenge for their opposition as they can swing the ball in both directions. The strength of the team is further amplified by their strong team of batsmen who are well adept at playing spin.

New Zealand appears to have everything going for them as they prepare to face off against India. With the World Test Championship (WTC) final fast approaching, India will need to step up and prepare themselves for the upcoming game if they are to beat the new crowd favourites.