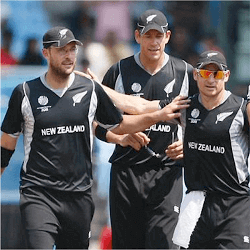 New Zealand Cricket Had a Tough 2016

It’s been a year wracked with global conflict, political brawls and Death’s merciless winnowing of artistic and athletic talent. New Zealand cricket fans have another grief to add to their heap of sorrows as 2016 draws to a close: it’s been a dismal year for the Black Caps, too.

December saw the ODI squad go down 3-0 in Australia in the Chappell-Hadlee Trophy. Apart from Martin Guptill’s 114 off 102 in the first match and captain Kane Williamson’s 81 not out in the second, and consistent bowling from Trent Boult that saw him take six wickets over the series, there was little to inspire Kiwi punters.

Williamson’s men will get a chance to redeem themselves when they host Bangladesh later this month, kicking off the first of three ODIs on December 26 at Hagley Oval in Christchurch. The two sides follow up with a three-match T20 series from January 3, and the visitors end their tour with two five-day tests in Wellington and Christchurch, starting on January 12 and January 20 respectively.

So cricket punters may yet see in the New Year with a bang. We hope so; some solid wins against Bangladesh would help erase the painful memory of that 3-0 Test drubbing in India over September and October. India’s winning margin of 321 runs in the final Test brought the Black Caps’ total runs deficit for the series to 696, and India rubbed it in by winning the ODI series that followed by 3 matches to 2.

Washed Out in South Africa

Cricket enthusiasts may have had high hopes for the South Africa tour in August, but the first Test was washed out at Kingsmead in Durban, and Faf du Plessis’ team claimed an emphatic 204-run victory in the second Test in Centurion. The only time a punt on the Black Caps went our way was in the earlier tour of Zimbabwe, starting in July, in which we scored two convincing Test wins.

Which isn’t to say there wasn’t plenty of cricket action between other nations to delight Kiwi punters in 2016. England thumping Pakistan in both Test and ODIs in June was a pleasant change, and watching Australia lose a Test series 2-1 at home to South Africa in November didn’t hurt, either!