No Changes For The Black Caps Final Test In Hamilton 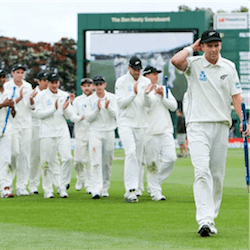 No Changes for The Black Caps Final Test

The New Zealand selectors have named an unchanged squad for the Black Caps final match of the summer against South Africa. New Zealand are coming off a 3-day thrashing from the Proteas at the Reserve basin and must win the final test to square the series. Despite this, there have been no changes to the squad for the test at Seddon Park in Hamilton on Saturday. The only changing variable is the fact that Trent Boult will be available and hoping his leg injury has recovered in time to let him play.

The medical staff has also ruled out Ross Taylor after tearing his calf muscle. The rest of the side stays the same. Gavin Larsen, the New Zealand national selector has said that he has faith in the team and they believe they are the best group of cricketers in the country. Larsen did comment on his disappointment in how the New Zealand side crumbled on the final day at the Basin Reserve.

According to Larson, there is a lot of work that has to take place before the first ball has been bowled. Larson says the bowling needs a bit of work and the team needs to score more runs overall. The selectors want to see a greater fight from the team. It has been the hallmark of the Back Caps over the past few years to fight till the end but that was not what happened at the Basin. The team dropped their guard and paid the price.

Neil Broom and Tom Latham Get the Nod

Larson explained that a full list of players had been considered by him and fellow selector Mike Hesson for the final test. Their faith remains intact for the team that lost by eight wickets in Wellington.  In the absence of Ross Taylor, Neil Broom will get his chance to prove his worth. Tom Latham also got the nod despite not being on form lately. Larson said that the selectors have 100 per cent faith in Latham. They admit that he is in a rut, but he is considered a classy player and his numbers speak for themselves.

Again, legspinner Ish Sodhi has no spot on the team with the selectors saying they already have the best spinners possible. This would be the combination of Mitch Santner and veteran offspinner Jeetan Patel. The selectors talked about including Sodhi but at the end of the day, they feel they have the right combination. In the batting line-up, both Jimmy Neesham and Colin de Grandhomme got the nod despite poor batting displays in the last test.

Eoin Morgan has pledged to drop himself from his English side rather than harm his country’s chances of success in the T20 World Cup. Morgan lived a forgettable time in ….

While star all-rounder Ben Stokes has now undergone a second operation on his injured finger, he’s unlikely to compete for England in the upcoming Ashes tour. Stokes first fractured his ….

The future of national cricket men’s coach Justin Langer remains in the balance and very much unclear. While Cricket Australia (CA) has remained defensive about the squad’s performance under Langer’s ….

England captain Joe Root has taken full responsibility for his side’s 151-run Test loss to India. He says his leadership involvement has been tried and found seriously wanting. Root clobbered ….

Will Ross Taylor Be Retiring?

This is the million-dollar question, isn’t it? Following the Black Caps World Test Championship win, Ross Taylor has been contemplating whether or not he should be retiring. While he had ….