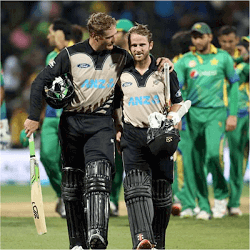 The First Win in 31 Years for New Zealand against Pakistan

New Zealand have finally broken their 31-year drought, managing to defeat Pakistan with a total of 2 – 0 in their two-Test series. The end to the competition took place this afternoon, in Hamilton, and saw the Black Caps winning by 138 runs, in what can certainly be seen as a tribute to tenacity. A fascinating final session had New Zealand reducing Pakistan from 158/1 to 230/all out.

Endurance and a humming second new-ball paid out the dividends required for Kane Williamson’s side as renewed strength was shown after they suffered two recent defeats against India and South Africa.

New Zealand’s Last Win against Pakistan was in February 1985

The last time New Zealand managed to defeat Pakistan was the 14th of February 1985, with the win taking place in Dunedin, thanks to Ewen Chatfield and Jeremy Coney producing a 50-run stand in order to haul in the target of 278. An Invercargill-bound train effected a spontaneous ten-minute stop to watch history unfolding from across its tracks on that splendid afternoon.

This time round, the Seddon Park-loyalists enjoyed the show, as they installed themselves in their beach chairs; huddled into their blankets; and sipped hot beverages from ever-filled thermoses in an effort to ward off a west wind. New Zealand’s fielding and bowling juggernaut managed at long last to roll through Pakistan’s stubborn top order, and went on to defeat the tail with a dramatic Tom Latham short-leg catch which removed Imran Kahn and finished the task.

Each specialist bowler managed to take wickets, a more than fair reward for a team showing. Mitchell Santner broke Pakistan’s ice of the top order with the first brace, and this was bookended by Neil Wagner managing to take three for none from six balls and so finish the feat.

Pakistan was enjoying reasonable wicket conditions for batting on: at stumps last night the team had managed to endure 239.1 overs –compared to the possible 351 that would have been theirs for four full days of play. This amount was near to a day and a season behind the usual attrition.

Sam Aslam, 91, and Captain Azhar Ali, 58, posted 131/60, and so created the longest opening partnership for the Pakistani opening pair in the test’s fourth innings. A 369 target was set for the tourists by Williamson in order to triumph in this test; square the series; and hold on to their Number 2 World Ranking.